We started this project almost two years ago and at long last finally finished it. I initially got the idea from Pinterest and decided that it was something we could do. After doing some research on the best way to drill holes in wine bottles via Youtube, we embarked on our quest to build "The Great Bottle Wall".  The first order of business was to collect wine bottles for the project. Being good Presbyterians, we reached out to our fellow brothers and sisters for their contributions, needless to say, our cofers were soon overflowing. We had estimated that we would require somewhere between 150-200 bottles for the project.  I think we ended up with about twice that number.  While we do have friends that consume their fair share of wine, having a son who sells wine for a living didn't hurt either.
I ordered some 12 mm 1/2 inch diamond tipped metal drill bits for ceramic glass that I found on Amazon at a very reasonable price.   Next, we filled a 5 gallon bucket about 3/4 full with sand and pushed the wine bottle neck first into the sand to hold the bottle snug while drilling the hole. We had found that if you mix up a little soapy water and put it on the bottom of the bottle, it reduced the friction and prevented glass particles from getting into your eyes.  Just the same, we wore protective  eye glasses while drilling. It takes approximately 5 minutes to drill a hole in the bottle of a wine glass, sometimes longer if the bottle has a particularly thick bottom or nipple. You have to apply even pressure and avoid angling the drill bit to prevent breakage. Once the learning curve was mastered, we began the process of removing labels,  cleaning and sorting the different wine bottles by size and color.  Since we had so many other projects going on with renovations inside and out on the house, landscaping, putting in a new garden, the chicken tractors,  the bee hives, etc., left precious little time to devote to such a low priority project, therefore, we did what we could, when we could.  Recently, after almost two years we decided that it was time to finally close the chapter on this project.

We decided to install the wall between some Maple trees on the north side of the house adjacent to the side yard garden I installed last year.  I installed a partial section of the wall in Feb. 2013 to make sure the plan was feasible before proceeding further. 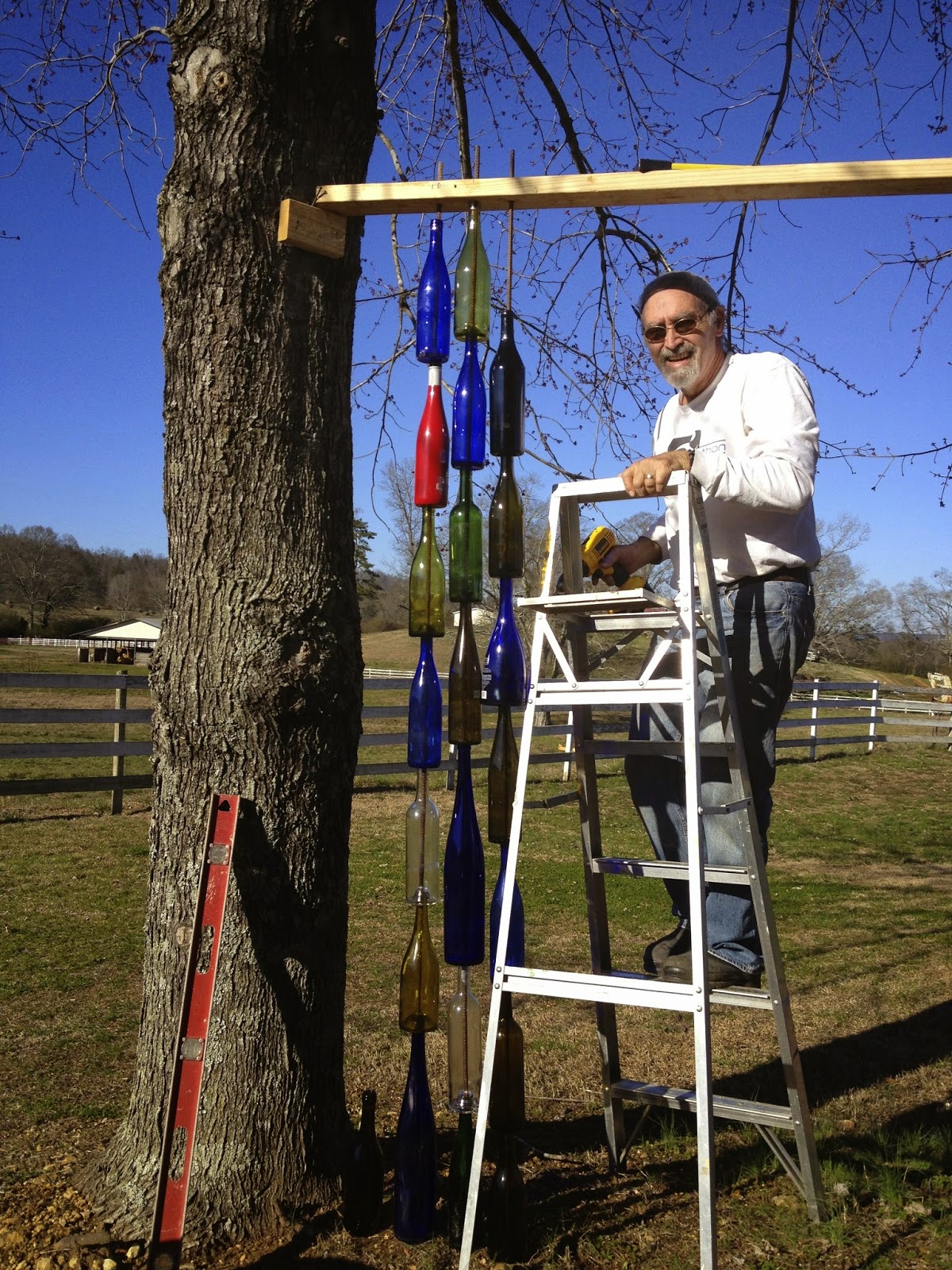 By doing so, it gave us an idea of the approximate number of bottles per row based on size of the bottles used and spacing of the rebar that would traverse through the bottles, and bracing to hold the wall in place. It remained this way until we started the final project about two weeks ago.  We decided to move the wall to the trees adjacent to the garden fence to add continuity to the landscaping and other structures. In doing so, we found that we could complete the project with the bottles we had already drilled and stored.  First we told down the temporary structure and removed the bottles from the rebar and relocated the overhead support to the new location. Next, we dug out and leveled the ground and installed a treated 4x4 timber at the base of the proposed structure. We drilled holes to correspond to the holes on the upper support structure.  Next, holes were drilled into both ends of the 4x4 and two foot sections of rebar hammered into the ground to hold the bottom support in place and  prevent movement. 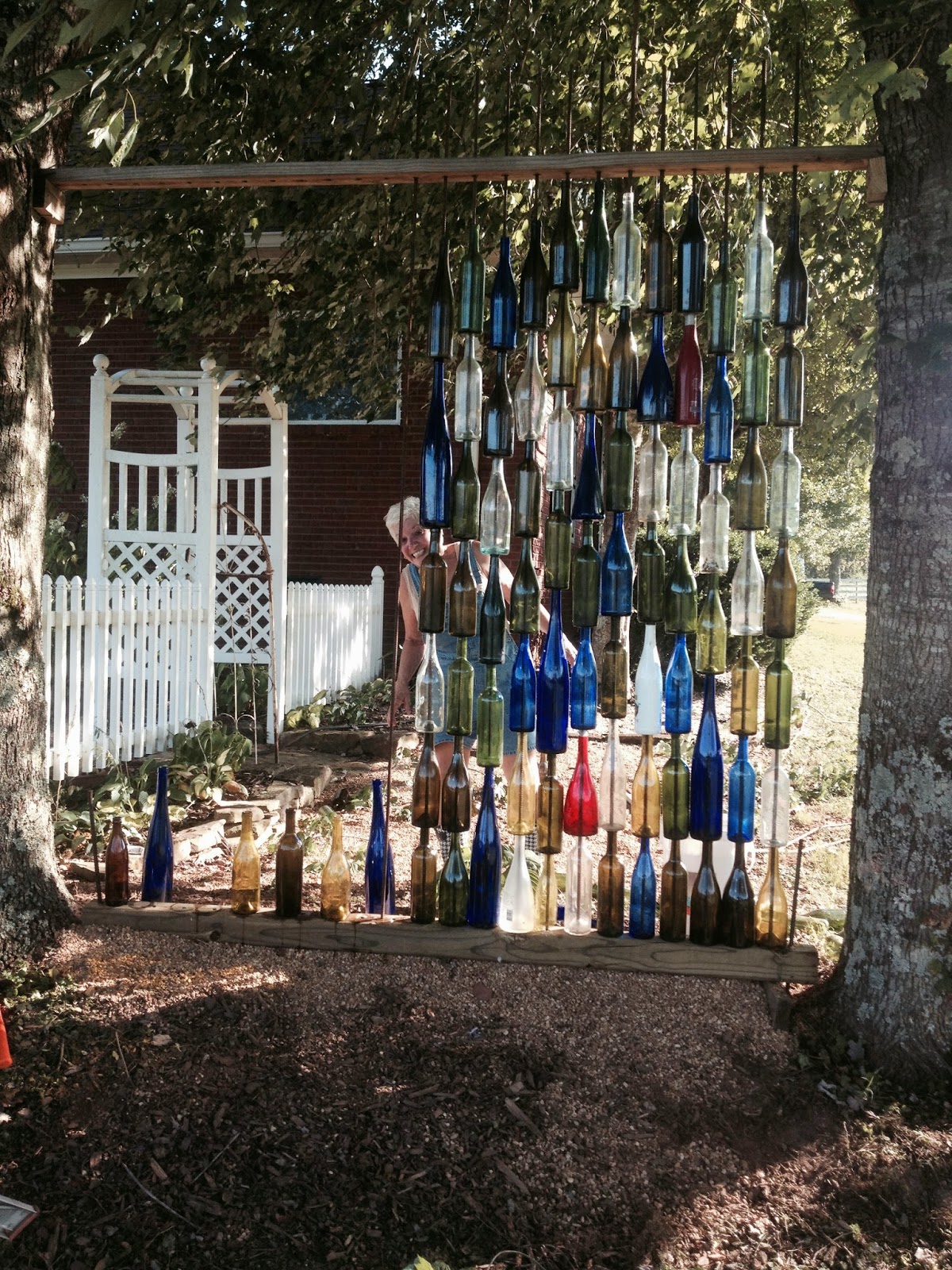 Next we installed one section at a time with no particular pattern in mind,  just varying color and size
as we progressed.  We decided to leave the excess rebar at the top in case we ever needed to replace broken bottles or insert new colors, or unusual bottles at a later date. 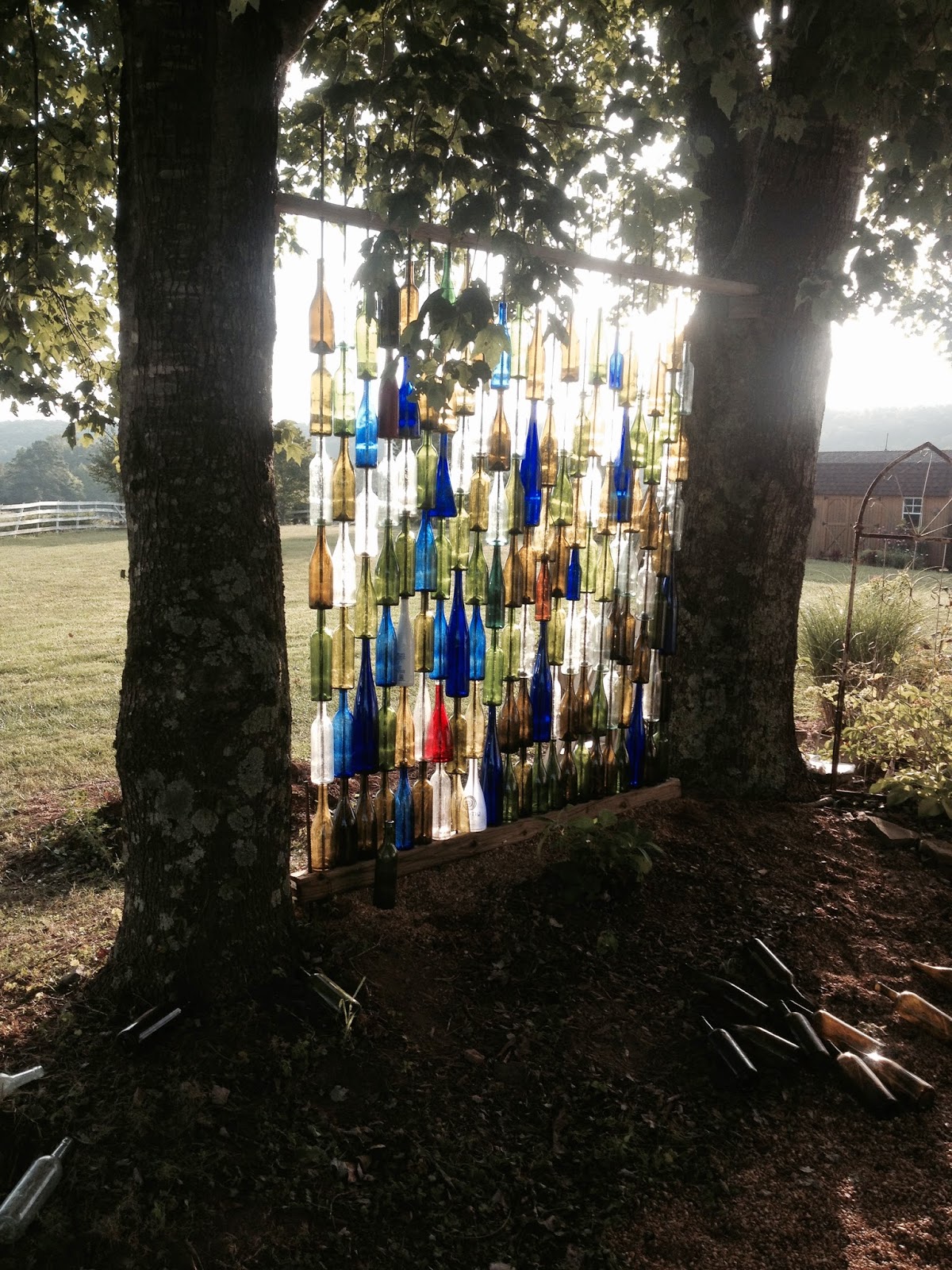 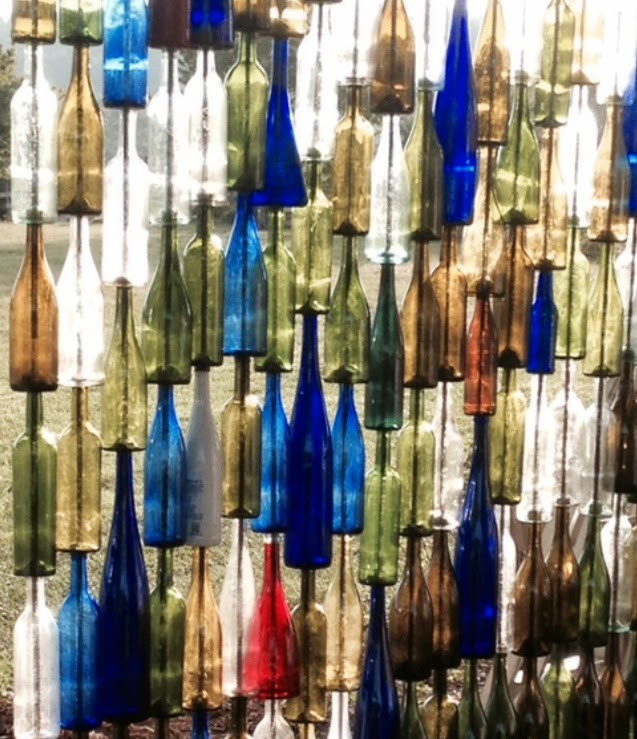 Although it took a long time, we are very pleased with the end result.  Now,  what do we do with the rest of these wine bottles?
Posted by David at 7:40 PM

You can border a garden with the bases of them :)

Thanks Keeley, I have seen that done on pinterest and it looks pretty cool. I may have to give it a try!