It's time again for one of my favorite oriental lilies "Casa blanca" whose name also brings to mind one of favorite movies of the same name. This lily has one of the most beautiful fragrances . It is much stronger and more pleasant than any of the other oriental lilies in my experience.  The flowers are big and beautiful and really stand out in the garden.  The only negative aspect of this lily is it's short blooming period which is common with most oriental lilies. 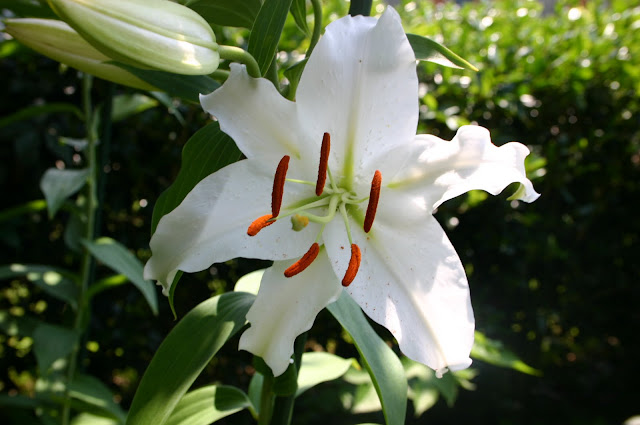 Attributes:  A fragrant, large Oriental hybrid lily that is easy to grow and tolerant of summer heat. It is a hardy perennial bulb that can be grown outdoors in zones 4-8(Peninsula Zone 7) and is very disease-resistant. Casa Blanca lilies usually grow 3 to 4 feet tall and hold up well without staking.  (Mine were reaching for the sun so I had to stake them.)  I think I will move them to a full sun location before next season.
My other favorite oriental lily is the "Stargazer " oriental lily. While not as fragrant as the Casa Blanca in my opinion, it is still a truly beautiful lily and a great addition to any garden. 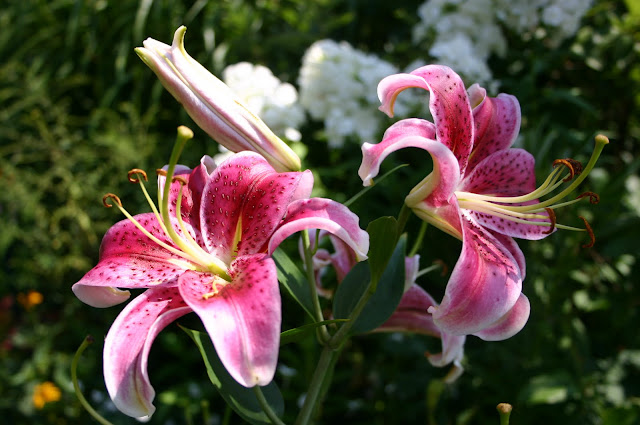 From the garden:
I am really bummed about my tomatoes. It appears that wilt is rampant in all my SWC's (self watering containers) which has me somewhat mystified. Typically wilt in tomatoes is caused by lack of water or by vascular wilts Verticillium and Fusarium  which are caused by soil-borne fungi that invade the tomato plants through injured roots. The fungi then spreads into the water-conducting tissue in the stem and blocks the flow of water to the foliage. Foliage of the affected plants turn yellow, then wilts and dies. I'm mystified because with the SWC the water should be consistently wicked to the root system of the plant. Secondly, the soil in the containers was garden and flower soil bought at Lowe's, so I would imagine that it would not contain any fungi.  I am resolved that the container tomatoes are a lost cause at least for this year until I can figure out what I did wrong. What tomatoes I harvested were very good, I'm just not happy with the production.  I still have quite a few tomatoes in the garden that are doing ok without any signs of wilt but are already about four feet tall and kind of spindly in my opinion and are just now starting to set flower. I have a soaker hose that I use to water them and usually water them 1-2 times a week as needed. I am concerned that they may not be getting enough hours of sunlight.  Anyway, live and learn. Thus are the woes of a farmer.
I have been harvesting the "Rattlesnake Pole Beans" the past couple of weeks and they are delicious in addition to the red okra which although limited in quantity is still very good. 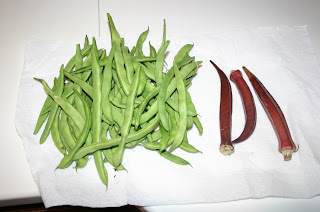 The eggplants are doing well in the SWC's . 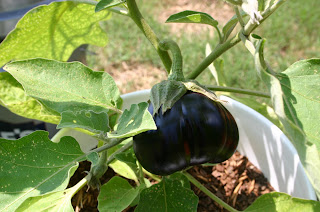 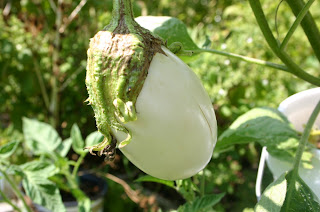 Finally, meet the newest addition to the family. "Thumbs" She is a polydactyl kitty with six toes  on both front feet.  Looking at the pictures you can see how she got her name. 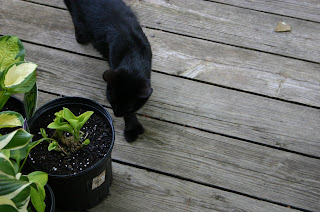 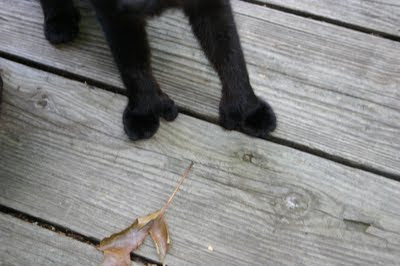 Thumbs is so cute! and love your blog ..great name, too. I read today that beans are high in silica..who would have thought it...

Love your blog..i read today beans are high in silica..who would have thought that..

Thanks Lilith for visiting my blog. I did not know that beans contained silica(silicon dioxide) either. I also found out that a deficency of this in your diet can cause arthritis. I plan on increasing my consumption as I already have arthritis in my knee and left thumb. Thanks for your comments and I hope you will visit again.