At the time we built our home twenty-three years ago, we had been breeding and showing Longhaired Dachshunds for about ten years.  We also had two small children, Drew and Mary Kathryn who were ages 8 and 4 at the time.  We had been very successful showing our dogs but decided raising our kids was more important than finishing another champion, so we hung up our leashes and retired our remaining dogs to just being our pets. Having quite a few dogs when we moved in, it was decided that the back yard would belong to the dogs until their time had passed.  As the number of Dachshunds dwindled over the years they were replaced by our son's Rhodesian Ridgeback 'Jade', our daughter's Rat Terrier 'Susie', 'Duncan' the rescue smooth mini Dachshund,  'Boomer' the rescue Rhodesian and 'Belle' my dad's "Dingo looking dog" I inherited when he passed away. 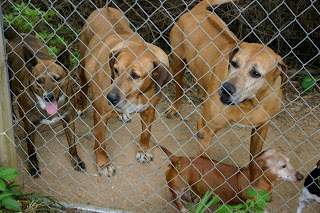 The backyard is heavily wooded with some large hardwoods and unfortunately some equally large pine trees. I attempted to introduce some new plants in the landscape that would do well under the canopy such as hydrangeas, acubas, hostas, and a few other shade loving plants. Jade and Boomer decided that I had planted them for their own personal use and they pulled up and ate everything I planted in their domain. After several failed attempts I finally threw up my hands and cried uncle.  Two years ago at age 12 we had to put Jade down due to cancer and recently we bid Boomer farewell at age 13. The three remaining dogs, Belle, Duncan, and Susie who are 10, 17, and 8  do not share the herbivore/beaver palate of their departed friends.  I am sad that Jade and Boomer are no longer with us, but after twenty-three years of patiently waiting, " I can now start developing the backyard". 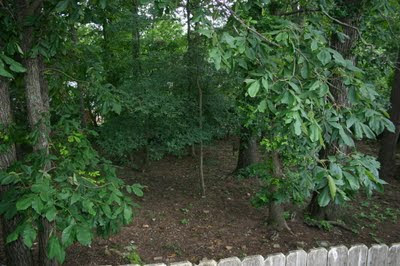 The backyard is 77x77 or 5929 square feet. It gently slopes away from the house and as I mentioned heavily wooded.  I plan on removing some of the smaller saplings and trees and possibly the large pines and replacing with Japanese Maples, hydrangeas, and lots of hostas.  Recently I went on a "hosta insanity"  buying spree and obtained 24 new hostas from the "Hosta Farm" that had a clearance sale going on at prices I couldn't refuse for some really great varieties. I think the average price was around
$ 5.17 each. 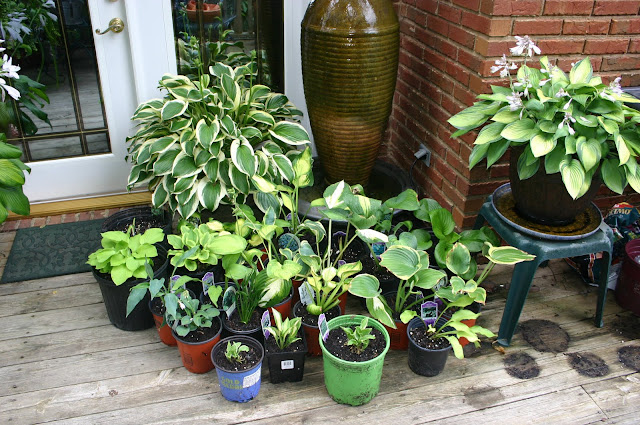 I received the plants nicely packaged  and labeled in plastic bags and wrapped in newspaper.  I did receive 3 or 4 bare root plants that had really nice root systems. I immediately potted them up and have been nursing them on the deck for the past couple of weeks. The bare rooted ones have already put out new growth. The varieties include: 'Blue Mouse Ears', 'Big Daddy', 'Captain Kirk', 'First Frost', 'Golden Tiara', 'August Moon', 'Rainforest Sunrise', 'Earth Angel', 'Vulcan', 'Praying Hands', 'Maui Buttercups', 'American Sweetheart', 'Allen P. McConell', 'Blue Angel', 'Brother Stefan', 'Sagae', 'Yankee Blue', 'Queen of the Seas', 'Pineapple Upside Down Cake', 'Komodo Dragon', 'Touch of Class', 'Orange Marmalade', 'Empress Wu' and 'Thunderbolt'.


I am looking forward to incorporating the hostas into the backyard in addition to the other plants mentioned earlier. I have already bought four "Snowflake Hydrangeas" that will be prominent in the new development.  I am also planning a new water feature in the coming year to include Koi.


I can't wait for these hostas to mature and become part of the new landscape. Until then, "Hosta Luego Baby".
Posted by David at 10:33 PM

David, I love your plan for the backyard. I love Hosta, Hydrangea and Japanese Maples too! Just planted 3 Japanese Maples this spring. I had a Thunderbolt Hosta that never really thrived, though I love that one. Hope you try again in a different spot.
Mario hortus5.com

Hi Mario and thanks for visiting. I really am excited about the potential for this area. The dogs over the years have created "dog paths" that i hope to built around. I have had great success with hostas in large pots and will employ them if they don't do as well in the ground. Thanks for your comments.

Beautiful and challenging space David! How fun. I love a new clean slate to start with and hostas are so wonderful! If you want some foxglove seed, email me. I'll have lots to share! I have a Rat Terrier too, named Shiloh. She views the garden as her own. Happy Gardening! Can't wait to see your pics as you break ground!