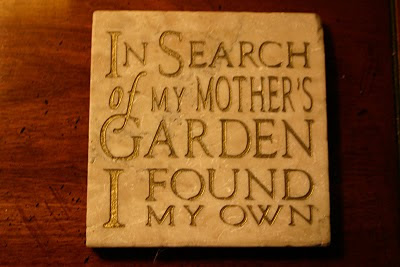 When I finally decided to start a gardening blog I thought long and hard as to what the name of my blog would be. My love of gardening came from my mother. My mother's garden was not very big at all. In fact, it was probably no more than a 20x20 plot. It was small because being a working farm, most of the workable ground was used for cash crops like cotton and corn or for raising vegetables. It was also because she did not have the money to buy plants or seeds. Even though it was small it was something she truly loved. I can remember that she had a particular fondness for zinnias, dahlias, and iris. Several years ago while visiting the Biltmore House I came across a small granite plaque in the gift shop of the arboretum with the inscription "In Search of My Mother's Garden I found my own" which brought back many fond memories of my mother and her garden. I had forgotten about this little plaque until very recently and when I saw it I instantly knew what I wanted to name my blog. It is in her memory that I dedicate this blog.

My own garden can be best described as a transitional eclectic garden. Transitional in that it is constantly changing or in flux. Eclectic in that it is a hodge-podge mixture of plants thrown together without a coherent design principle or master plan in mind. If it pleases me, fine: if not, I move it somewhere else and replace it with something else. John Floyd a noted horticulturalist and gardening friend once told me "plants have legs". My plants have more legs than a spider.

Most of my gardening efforts involve the front and side yards. The back yard is heavily wooded and occupied by our four dogs. Effort to garden in this area has proven an exercise in futility. I have a Rhodesian Ridgeback that thinks he is part beaver and promptly eats any plants that invades his domain. Thus, I have relinquished this area for future development once the dogs have gone to the happy hunting grounds. Unfortunately, I'm afraid some of them may outlive me.

I became really serious with the landscaping in 2004 when a storm did major damage to the Bradford Pears that I had planted between my house and my neighbors. Unable to save them I had them removed and the stumps ground down. What had been a shade garden suddenly became a full sun garden and I had to relocate about 75 shade loving plants immediately. I replaced the Bradfords with a single Eastern Redbud (Forest Pansy) located in the middle of the bed. Next came some ornamental grasses and a doublefile viburnum (shasta), some arborvitaes , and a hedge row of needlepoint hollies along the property line. Finally, I filled in the beds with perennials with seasonal annuals. Since then I have moved multiple plants, added some knockout roses, an arbor with New Dawn roses, put in some stone paths and replaced the bermuda glass with emerald green zoysia.

The front yard continues to be a work in progress. I would have liked to put a white picket fence across the front as I think it would go very well with the Federal Style architecture of my house, but the neighborhood covenants prohibit any fence past the rear of the dwelling. Let me say now that I think the only valid covenants that should exist are the ones between you and your God. Since the picket fence was not an option, I decided to make a living fence. I planted a needlepoint holly hedge between my neighbor's house that mirrored the hedge that separated my other neighbor. The front hedge is composed of knockout roses(single red) and chinese fringe plants (lorapetalums-razzle dazzle I believe). Although I am somewhat pleased with the end result, I am still not totally pleased and continue to look for ideas to enhance this part of the landscape.

The pictures below shows where I started from and how things look today. 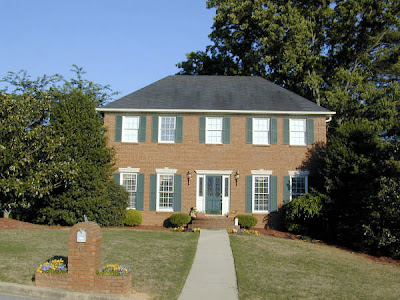 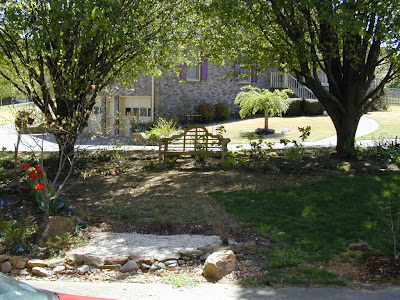 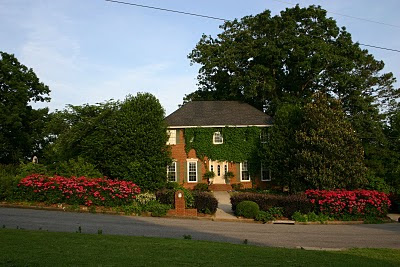 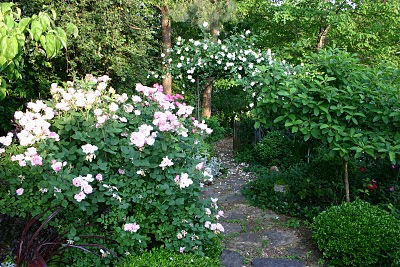 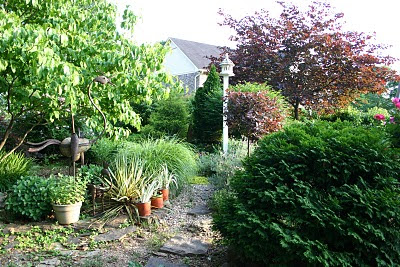 I am so proud of you for finally talking about your love of gardening! Keep up the GREAT work!
Love, Cynthia

This may seem like an odd question, but could you possibly tell me the physical size of the granite "Mother's Garden" plaque? At one time my wife had one, but it was broken a few years ago. I have been looking for a replacement, but can't seem to find one. I am looking at getting a custom one made, but need to know the size. Thank you so much.

Hello Anonymous, thanks for visiting my blog. The plaque is a small one measuring 4"x 4". I purchased it in the arboretum gift shop next to the walled garden at the Biltmore Estate. It is made by a company called Stone Sense.You could probably have one made larger at a memorial engraving business. Good luck.

Thank you so much for your help. I really apprciate it!

I too would love to find this plaque but have had no luck on the internet. Anyone?

I have found where you can buy the plaque. It is at Real Blue sky gifts and the website is http://www.realblueskygifts.com/products.asp?id=217979477